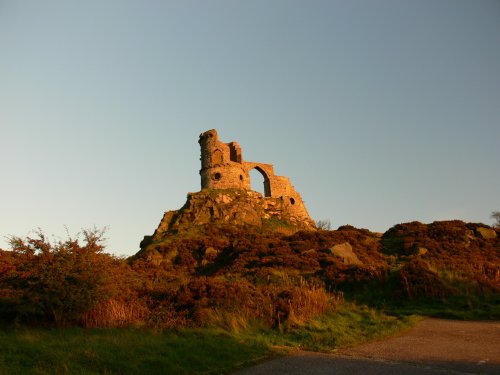 There's been a church on the site of Lancaster Priory, also known as St Mary's, since 630AD, although it's believed there was actually a religious building there some 400 years before that. In the 11th century, it became a Benedictine Priory, a gift, apparently from a relation of William the Conqueror to a Normandy Benedictine Abbey as a place of sanctuary. In the 15th century it was given to an English monastic order, and then became the parish church for Lancaster, which it has remained, and was more or less rebuilt.

The bell tower that you see today was built some 300 years later, when the old tower (originally about twelve feet north of where today's one stands, and a good bit shorter) was in danger of falling down. Inside, you can see furniture and decoration from every period within St Mary's long history: the carved stone font, for instance, with its sculptures of animals and birds, dates from the 1840s, while its lovely wooden cover has been in the church since 1631.

The choir stalls, however, are the Priory's treasure. Dating from the 1340s, it's believed they were carved by the Benedictine monks and they are superb. Carefully lift the seats to see the carvings underneath on the misericords - the small shelves under the seats to give the monks somewhere to rest against during the long services. The stalls are now decorated with modern tapestries, embroidered by the parishioners in the 1960s and 70s, which actually fit in very well with the ancient wooden carvings.

South of Lancaster you'll find the villages of Great Mitton and Whalley, just a mile or so apart. At All Hallows in Great Mitton, you'll find an excellent group of alabaster tombs, built for the Shireburn family - the Shireburn Chapel was originally built in the 15th century (the church itself is older) and then more or less rebuilt in the late 16th century to house the tombs, the earliest of which is from 1594. Although the effigies show the deceased in normal dress, all are carved lying recumbent, hand on heart, like the knights of old. Except the most recent carving - that of the last Shireburn, a young boy of nine, who died at the start of the 18th century after eating poisoness berries, and is carved standing, surrounded by tokens of death.

The parish church of St Mary's and All Saints at Whalley was built probably about 1200 AD, though there's been a St Mary's at Whalley since Saxon times, and although little remains of the Norman church erected there in the late 11th century, you can still see three Celtic crosses, believed to date from the 10th century. A squat, traditional little building, it's far grander inside than out. Another excellent example of medieval choir stalls (originally carved for the old abbey near by), with some spectacular pews (mainly 17th century) make this a lovely church to visit.

We're going to take a bit of a liberty and include the churches of Liverpool and Manchester here: partly because they used to be in Lancashire (until yet another round of county-shifting) and partly because we won't specifically be covering the counties of Merseyside and Greater Manchester any time soon and it would be a real shame to miss out on their churches. Large modern cities may not always lend themselves to housing picturesque medieval churches, but you'd be mistaken if you thought there was nothing worth visiting in these admittedly overly populated conurbations.

In addition to its cathedrals, namely the early 20th century Liverpool Cathedral, which is the largest Anglican cathedral in Europe, and its spectacular if very modern sister, the Metropolitan Cathedral, Liverpool also boasts two impressive Victorian churches. Neither St Agnes' at Sefton Park, nor St John the Baptist in Tuebrook, look particularly exciting on the outside, but inside they are magnificent examples of the best works of their respective designers, J L Pearson and G F Bodley. Both decorated internally in Gothic style, the red-brick St Agnes, dating from the 1880s, is filled with pale cream stonework, with high archways, sculptures of saints and a particularly noteworthy carved pulpit. There's an impressive crucifixion scene on the alter screen, and have a look out for the statue of St Pancras, next to the pulpit. St Pancras was reputedly martyred for his Christian beliefs at the age of 14 in 4th century Rome - the parish became known as St Agnes and St Pancras in its centenary year of 1985, and yes, this is the same St Pancras also celebrated by the London station (itself named after a local church) of the same name. St Agnes herself is also depicted - she was martyred at just 13 years of age for her religious beliefs. St John, the elder of the two churches by just a decade or so, is a wealth of colourful decoration, from wall paintings to stencilled flowers between the arches.

Manchester has undergone much modernisation, and now only one of its 19 churches dating from the 18th century survives. This is St Ann's, in the town centre: its tower (which used to have a wooden spire, now sadly gone) is said to have once marked the exact centre of Manchester. Built from the local pink sandstone, it's a warm building, with very attractive round-arched windows to the north, which look quite distinguished. This theme is continued inside, with quite a plain interior and rich wooden pews, some still showing the original numbers by which seats were allocated to worshippers.

While you're in the area, hunt out St Mary's in Mulberry Street. Known as the 'Hidden Gem', this is believed to be the first Roman Catholic church built in England after the Reformation: the Relief Act, which allowed Roman Catholic churches to be built again was passed in 1791, and St Mary's was started the following year. It's been rebuilt since then, in the mid 1800s, but still marks an important time in England's religious history.

Heading north out of the cities, you'll find the village of Sefton (no relation to Sefton Park in Liverpool). This is the home of one of the few medieval churches in the area, St Helen's, which was first built as a private chapel for the local landowners, the Molyneux family, later to become the Earls of Sefton (one of whom would be founder of the Grand National steeplechase), around 1170. It was expanded and the tower and spire added in the 14th century, and then expanded again and partially rebuilt in the early 1500s. St Helen's is famous for its Tudor woodwork, with carved bench-ends, pews and screens, while the pretty octagonal pulpit, whose tapering base looks incapable of bearing its weight, is dated 1635.

Heading north-east from Sefton is the village of Standish. It's unfortunately close to the M6, but the local church, 13th century St Wilfrid's, refuses to be cowed by the impact of modern life. At Standish, they can trace the church rectors back by name to 1206 (forty two to date, including several Standishes). A dominating edifice, with a tall tower and spire (which had to be rebuilt in the second half of the 19th century following storm damage), part of the main church was rebuilt with the local, paler, gritstone in the 16th century, giving it an interesting two-tone effect on the outside. It's the interior that makes St Wilfrid's special, though, with undoubtedly the finest ceiling in the county, composed of elaborate panels, particularly above the chancel, with beams engraved with the initials of the local gentry who donated money to the church.