Welcome to Gloucestershire and most of all to its tasty, local dishes. In this article you will learn about Gloucester's famous foods and also find three recipes to enable you to prepare a lunch, dinner and dessert Gloucestershire style.

Let's begin with Gloucestershire's most famous foodstuff; Double Gloucester cheese. Renowned for its mellow flavour and popular in recipes for the ease with which it melts, this cheese, also known at one time as Berkeley cheese, has been made in the Vale of Gloucester for over a thousand years.

Double Gloucester is stronger in flavour and is made with the full cream milk from the morning and evening milkings. A single cheese can weigh anything from fifteen to twenty pounds and takes many, many months to mature. Double Gloucester keeps well and it is for this reason that Double Gloucester became the more famous of the two varieties - it would have been easier to transport the cheese long distance to markets.

In the nineteenth century a rind was added to protect the cheeses in transit and also at this time the orange-red colouring we associate with Double Gloucester was first created by adding beetroot juice and carrot juice to the cheese. Today's cheeses are coloured with annatto.

If you really enjoy your Double Gloucester Cheese, why not try and win one in the
Cheese Rolling Races? In these races, the competitors race down Cooper's Hill, which has at best a one-in-two gradient, chasing a 7lb Double Gloucester Cheese packed inside a wooden case, whoever wins- gets to keep the cheese. It is a popular but dangerous race. If you want to see it for yourself, or even participate, then go to Cooper's Hill on the last Bank Holiday Monday in May.

Alternatively, if you prefer a safer way to spend your day, then why not re-use some of Sunday's roast lamb and make yourself a Gloucestershire Squab Pie?

Gloucestershire has long been associated with sheep farming. Woollen merchants funded the building of many Gloucestershire churches. Lamb and mutton, therefore, were a common source of meat. And as meat has always been expensive, it made sense to stretch the meat out for a meal or two. Most traditional British dishes involve re-using leftovers in some way to produce another nutritious and delicious meal. And this pie really is delicious. In fact, I'm surprised it's not more popular. Try it for yourself and see what I mean.

And for dessert, what could be better than some Gloucester Pancakes? Made from suet dough, these are a wonderfully warm, filling, comfort food in cold, autumnal weather.

I hope that's given you an idea of the foods to look out for when in Gloucestershire. But why wait until you visit? You can just as easily make them at home.

Gloucestershire Cheese and Ale Pie (Serves 2 as a meal, 4 as a snack)

6oz/175g Double Gloucester Cheese
4 slices toasted bread
4fl oz/125ml Brown ale
1 teaspoon English Mustard (powdered not made)
1. Pre-heat the oven to Gas Mark 5, 190°C or 375°F.
2. Slice the cheese as thinly as possible - you can use grated cheese if you prefer.
3. Put the slices/grated cheese in the bottom of a greased, shallow, ovenproof dish.
4. Spread the mustard evenly over the cheese
5. Pour the brown ale over the cheese and cover the dish with foil
6. Bake for 10 minutes, or until the cheese has softened.
7. Pour the cheese and ale mix over the toast and serve immediately.

1. Preheat the oven to Gas Mark 6, 200°C or 400°F.
2. Peel and dice the potatoes and swede, place into a large pan of cold water, bring to the boil and simmer for 15 minutes or until tender.
3. Peel, core and slice the apples. Slice the onions and then blanch the apples and onions together in boiling water for 5 minutes. Drain well.
4. When the potatoes and swede are tender, drain them and mash together with half of the butter. Add salt and pepper to taste.
5. In a greased, deep, ovenproof dish, place alternate layers of lamb, then the apple and onion mix.
6. Pour the stock over the layers and add the swede and potato mash. Dot the top of the mash with butter, then bake in the oven for 50 minutes, or until golden brown.

1. Make the dough by mixing together the flour, baking powder and salt and rubbing in the suet.
2. Beat the egg and add the egg and enough milk to make a stiff suet dough.
3. Roll out on a floured surface to a depth of about half an inch and then cut into rounds using a plain, round 2 inch cutter. (a cup can also be used)
4. Melt some lard in a frying pan and fry the pancakes until golden brown on both sides.
5. Drain on kitchen paper.
6. Serve with golden syrup.

A Pictures of England article submitted by Dawn Copeman 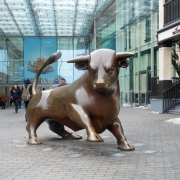