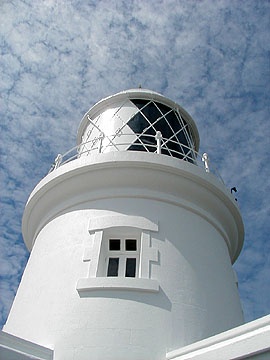 In this fascinating area of old Cornish Tin Mines, Pendeen Lighthouse, built in 1900 to guide shipping off the coast between Cape Cornwall and Gunard's Head, makes a striking feature. It was built by Arthur Carkeek of Redruth to a design by Trinity House, its flashes can be seen from 28 miles away, these are four flashes every fifteen seconds, and a fog blast of every 20 seconds. Since its interception, the lighthouse has saved many a ship from the treacherous off shore rocks and reefs surrounding this part of the Cornish coast. The original lamp used before the lighthouse was automated is on display in Trinity House National Lighthouse Centre in Penzance.

Pendeen is a typical Cornish village lying in the rural landscape a short distance from the sea. Perched above the cliffs visitors will find numerous old mining relics on what is now the South West Coast Path. Those who take the path reap a rich reward of magnificent seascapes, lovely bays, little creeks, all of interest and some of incredible beauty and stark almost unexplored loneliness.

All around there is a myriad of pathways leading to tiny hamlets and picturesque villages, each with its own character and history, some with ancient churches, and all with pretty cottages that in the past housed the mining and fishing communities of the region.

The area is idyllic for walkers, further along in St.Ives Bay there is surfing, sailing and fishing.
Add to favourites
Pictures Pendeen accommodation Add Facts Map Upload