a Castle in the town of Kyle of Lochalsh, in the county of Highland 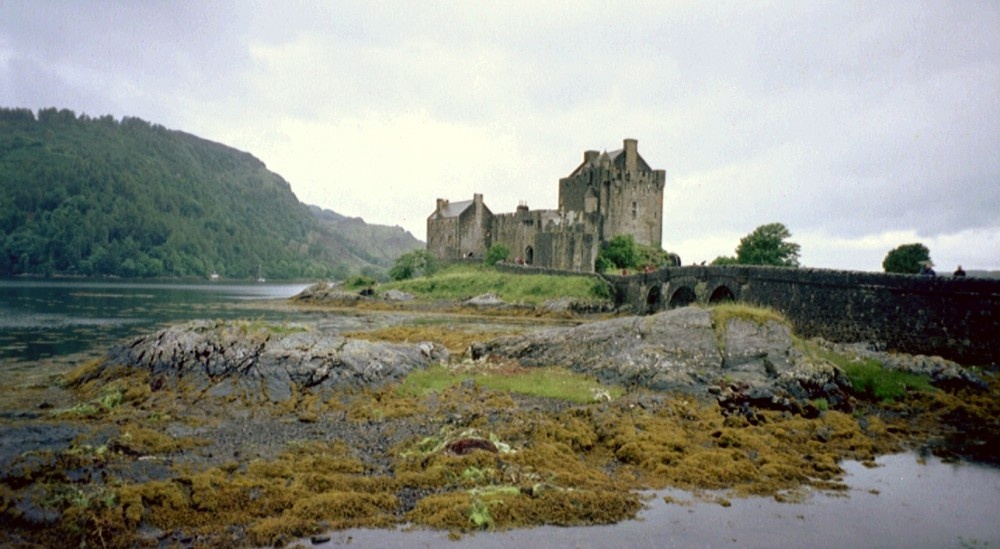 This famous Scottish castle rises on a shallow rocky promontory which is actually at the meeting point of three lochs, Loch Long, Loch Duich and Loch Alsh. Its setting is idyllic, the shore surrounding the castle is lapped by gentle waves and in the background lye mountains of burnished browns and varying shades of blue.

The history of Eilean Donan Castle appears to have begun way back in the mists of time, perhaps between the 6th and 7th centuries. More appears to be known of the castle after it was occupied by Kenneth Mackenzie late in the 13th century. The story of the castle is stirring stuff, tales and legends abound of feuds between the clans and there are claims and counter claims concerning the right to the title "Lord of the Isles". In the early part of the 18th century the castle was used by Government troops, but was recaptured by the Jacobites before the Battle of Sheriffmuir in 1715. Following an attack by Government warships in 1719 the castle was abandoned and for almost two hundred years Eilean Donan lay at the mercy of the elements.

Mercifully, in 1911 the castle was purchased by John MacRae-Gilstrap and by 1912 the restoration of this grand old castle had begun. The project, which included the multi-arched bridge to the island took 20 years to complete and in 1983 the MacRae family formed a trust for the preservation of Eilean Donan.

A visit to the castle offers you a walk with history in the most beautiful of surroundings. There are wonderful, far reaching views in every direction, with the road leading away from the castle taking you to the Kyle of Lochalsh from which the Isle of Skye is just a short trip across the water.

Inside Eilean Donan there is a veritable feast of winding stairways and perfectly laid out rooms including a Great Hall with superb fireplace and magnificent timbered ceiling. Amongst the treasures on show is a lock of hair believed to belong to the Bonnie Prince. The Billeting Room with a its stone vaulted ceiling would once have been used for soldiers but it now forms the backdrop for a fascinating collection of castle memorabilia, with the emphasis on the history of the MacRea family. The Billeting room also features rare artefacts collected from the area. There are several bedrooms on show and a recreated kitchen looking very much as it would have done in 1932, with life size models of staff preparing for a formal banquet.

Throughout the year there are various exhibitions, a visitors centre allows you to take coffee or tea in comfort and there are gifts and souvenirs.