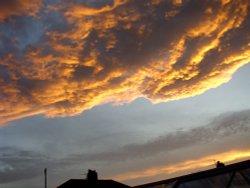 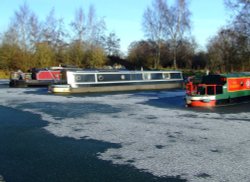 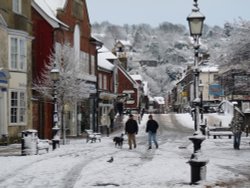 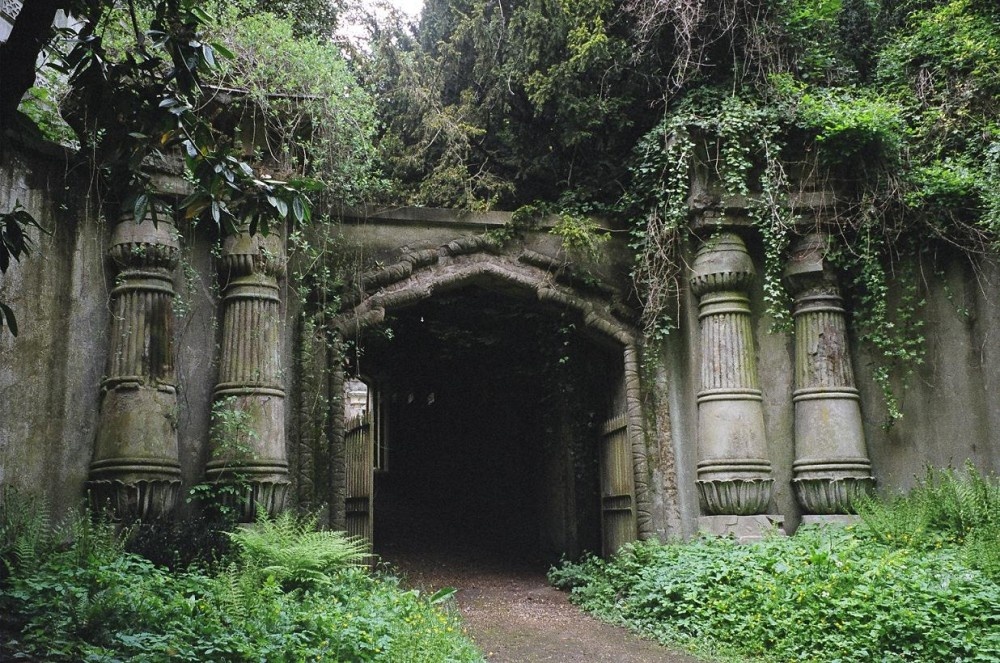 10 Spooky places to visit this Halloween.
Please share the beauty of England by sharing this article... 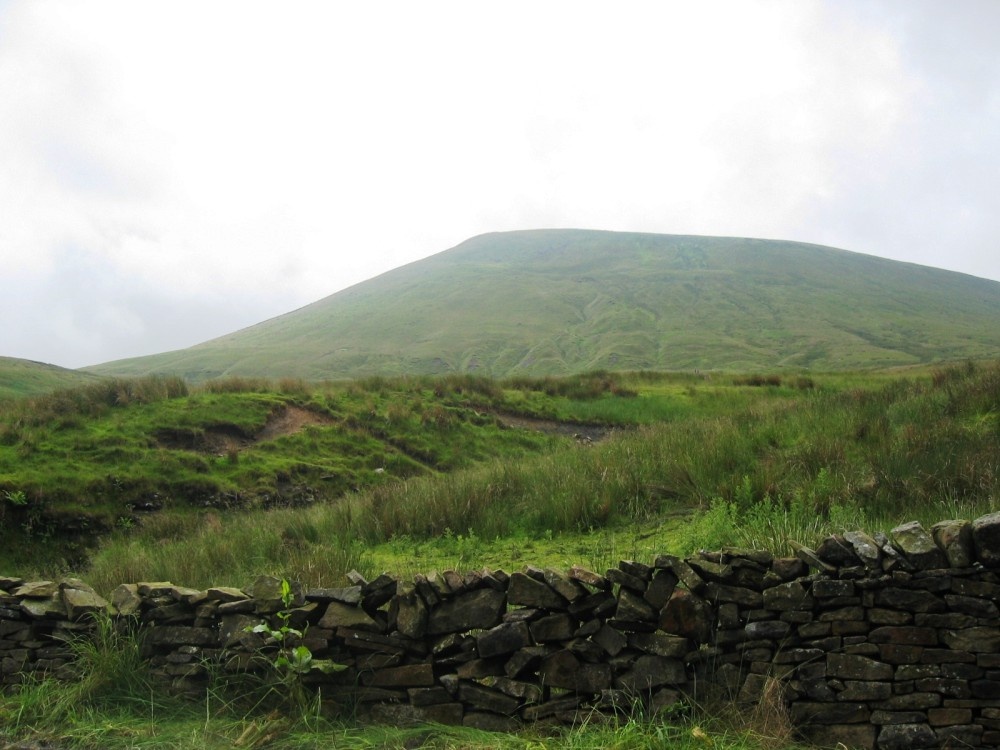 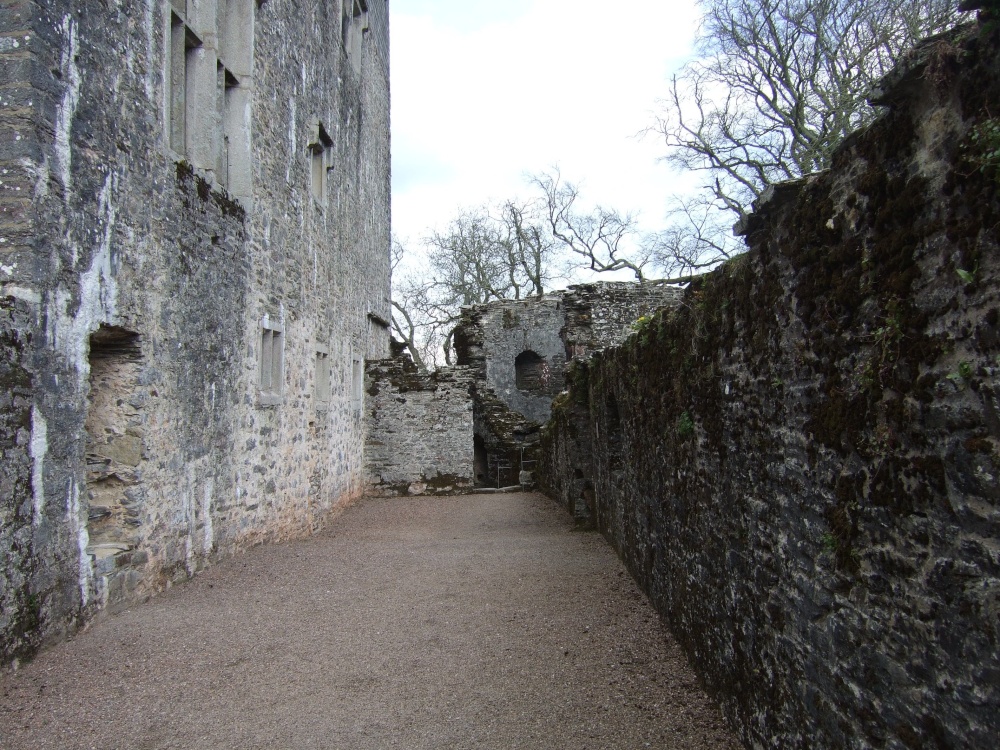 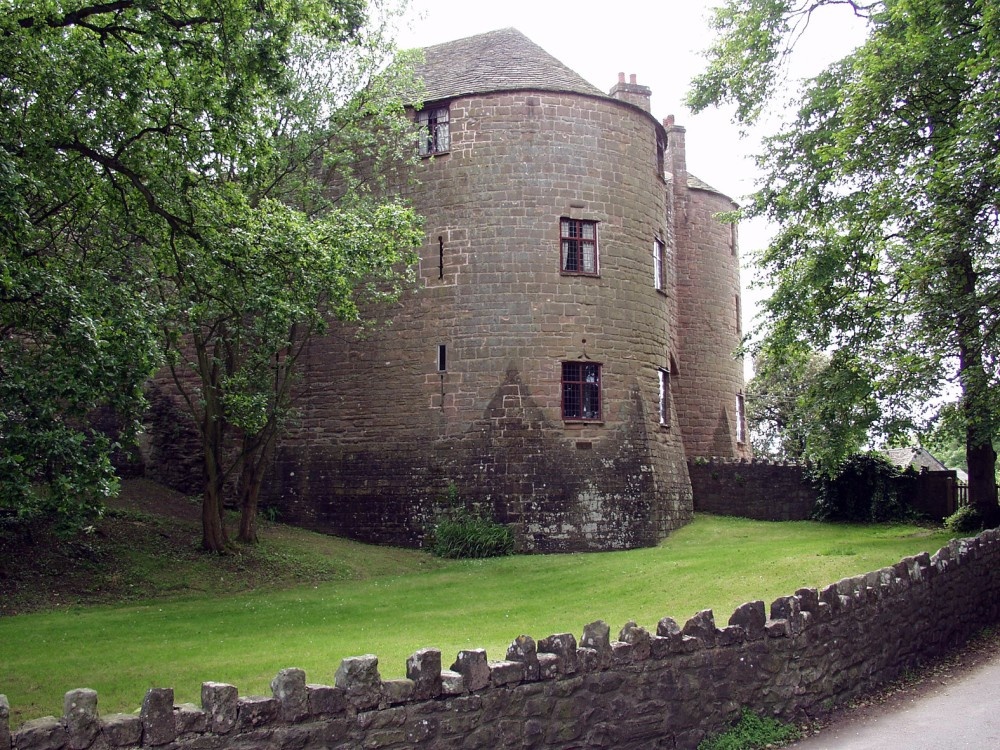 St.Briavels Castle stands in an outstanding scenery high above the River Wye. It is an evocative setting, reminiscent of early English King's, from King John onwards, who loved this spot, and hunted in the Forest of Dean.

The castle is built on the site of an earlier fortress, it was built in 1205 as a hunting lodge for King John. It was further fortified with towers in 1293, as part of the English defences against Welsh marauders. These two round towers, flanking a gatehouse, now form one of the most romantic of all Youth Hostels! Apart from comfortable accommodation, the hostel invites visitors to part-take of a medieval banquet on Wednesdays and Saturdays in August.

In the village there is a superb Norman church, this shows additions from the 13th-century as well as a considerable amount of restoration. None-the-less, it has some splendid church treasures and is well worth seeing.

St. Briavels, from its lofty limestone plateau 800 feet above the Wye Valley, gives what are probably the finest views of this sweeping river valley. The village is of rural character and charm, it has a post office, a local craft shop and a couple of local inns where you can pass away an idle hour following an enjoyable walk around the village. 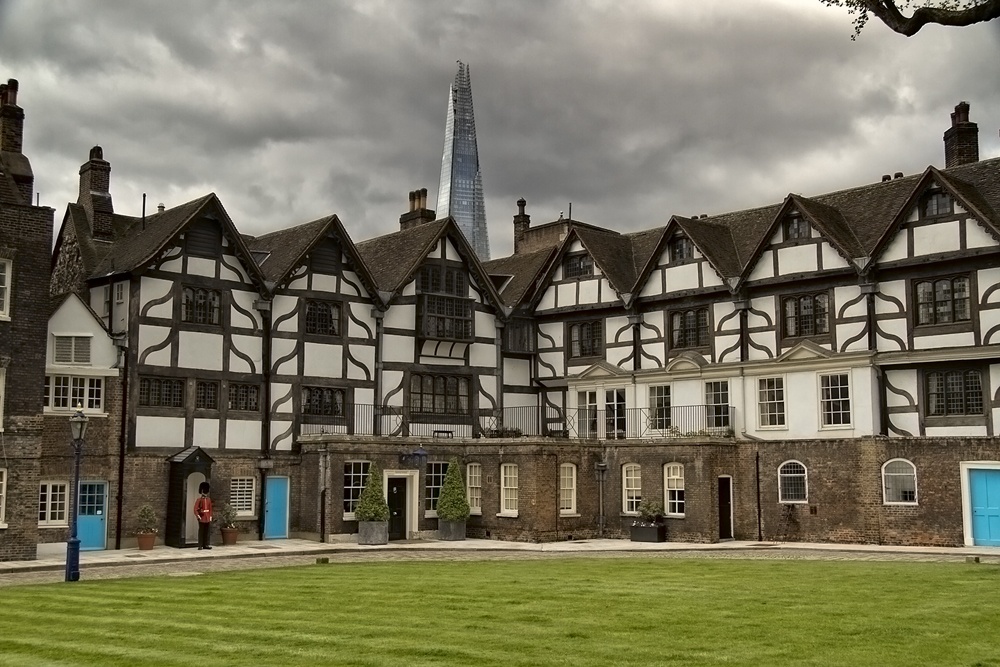 Historic epicentre of might and majesty, the tower has a history without parallel anywhere else in the world. With its icy past that today still sends shivers down the spine, it is difficult to believe that the tower originated as a Royal Palace, but it did.

It is one of the most important pieces of medieval architecture, and is the most visited castle in England. At its core is the great White Tower built by William the Conqueror in about 1080. He built the Tower within the Roman city walls which provided part of the fortifications.

At the time of the 13th-century the building had taken on the shape we see today, with the addition of being further fortified by two rings of massive walls with towers. These were the work of Richard I, Henry II, and Edward I, and although they have been much repaired and strengthened, they remain largely as built.

The tower has so many bloodthirsty associations that it seems impossible it was ever used as a happy Royal home. Many of history's most powerful characters stalked the Tower's corridors. It's use as a prison is well documented, the walls of Beauchamp Tower are carved with the last written words of those awaiting death, and the Bowyer Tower still contains some of the instruments of torture used on those awaiting trial.

State prisoners were usually hurried in through Traitors Gate in St.Stephen's Hill, and executions took place inside the Tower, and more publicly, outside on Tower Hill. Some of the important people to be imprisoned and executed here include; Sir Thomas Moore, Archbishop Laud, Lady Jane Grey, and Anne Boleyn, Henry VIII's second wife for whom he divorced Queen Catherine and divided the church.

England's Crown Jewels are kept locked in the Tower of London as a reminder of when Oliver Cromwell tried to demolish the palace buildings, and the fact that it once served as a Royal home. The sight of these historic jewels, symbols of majesty, is simply overwhelming, and leaves all who gaze upon them breathless with wonder.

The Ravens of the Tower are a source of fascination, it is said that if they ever left the monarchy would fall. However, since they have their wings clipped this seems unlikely. In the moat visitors can see a memorial to the Ravens who have lived and died within the Tower walls.

In the White Tower there is a magnificent display of medieval arms and armour, including the famous suit of armour made for Henry VIII.

Prince Albert, Consort of Queen Victoria was responsible for restoring St.John's Chapel back to its former Romanesque beauty. The chapel was built in 1080 at the same time as the Tower buildings began. 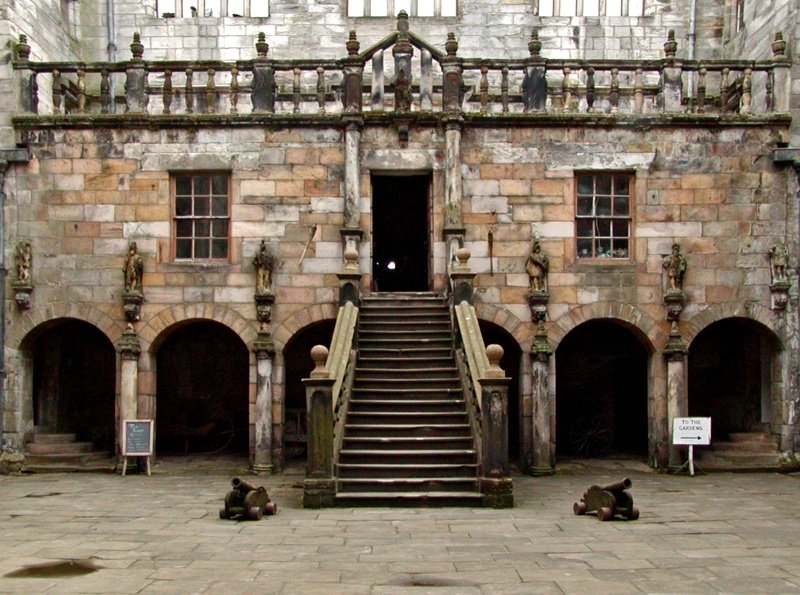 Set within romantic grounds, the splendour of Chillingham Castle is matched only by the dramatic grandeur of the surrounding Cheviot Hills, lying beyond the castle's 600 acre parkland.

It is an ancient place, with a reputation for ghosts, thus it is not surprising to find that it has dungeons and a torture chamber. The castle, hiding behind trees and foliage has been the home of the Earls of Grey and their descendents since its inception in the 1200's. It is believed to have been fortified in 1344 and consists of four square angle towers linked by a curtain wall, with various domestic buildings added at later dates.

The castle's grand entrance was built in the 17th century, with its beautiful landscaped park being laid out later by Sir Jeffery de Wyatville, who did Windsor Castle, in the early part of the 19th century.

The castle offers a number of beautifully decorated state rooms. The James I Drawing Room is named after a visit by the king who came to Chillingham in 1617. Here visitors can see a grand Elizabethan ceiling noted for its intricate ribs and pendants.

In 1298, Edward, Hammer of the Scots, who became King Edward I in the same year, stayed at the castle and the room named for him is the oldest in the building. This has been restored with furnishings of the 13th century, it has armour and weapons of the period and on display is the original licence to crenellate. This was drawn up by William Wakefield, secretary to William III, and is one of the castle's most prized possessions.

The sumptuous Great Hall is heavy with atmosphere, it has a flag stone floor, suits of armour, weapons, heads of deer adorning the walls as well as paintings of King Charles I, James II, Lord Bacon and Judge Jeffries. With long tables set with pewter candle sticks, it is easy to let your mind wander back to the days when Kings, Queens, Knights, Lords and Ladies would have gathered in this great chamber for an evening of feasting and merriment.

The Minstrels Hall is equally atmospheric, this has tapestries, spears, two magnificent fireplaces and the head of pre-historic elk. It makes a magnificent setting for the Medieval banquets frequently held here at the castle.

Visitors to Chillingham may tour the dungeons and the torture chambers, though these are not for the faint hearted! Scary at the best of times, lacking in light, with only narrow wall slits for air, here you can see some of the most horrific torture implements in the country. These include, a bed of nails, a stretching rack, thumb screws, leg irons, chains, cages and traps. There is even a trap door in the floor through which it possible to see into the vault below where there are the bones of a child! No wonder ghostly tales persist, for no-one would care to pass through here on an ill-lit starless night.

In the grounds of the castle visitors can soak up an entirely different atmosphere amongst beautifully laid out landscape of formal gardens, woodland and a lake. The Italian Garden survives from 1828 when it was designed by Sir Jeffery de Wyatville, its many lovely aspects have not been marred by the original garden statutory being replaced by modern replica's and its attraction is heightened further still by the wonderful 15 ft thick wall, once a jousting grandstand, which partially encloses the garden to one side.

If you take time to explore both the woods and the lake you may be fortunate to spot some of the famous Chillingham Wild Cattle. Wild animals have been a feature of the Chillingham landscape for centuries, these days you can often see badger, deer and fox. The lake is covered with playful ducks, plenty of fish can be seen and sometimes hidden in the bulrushes are frogs.

Chillingham Castle has often been used as a location for film and television, it was the backdrop for many of the scenes for the film Elizabeth and television has staged "The Big Breakfast" here when the torture chamber implements where filmed.

During the year the castle stages a number of colourful events and festivals, these include Musical Concerts, Opera, Morris Dancing, Garden Parties and Fairs.

Chillingham Castle belongs to the Historic Houses Association, it is open to public view for most of the year. 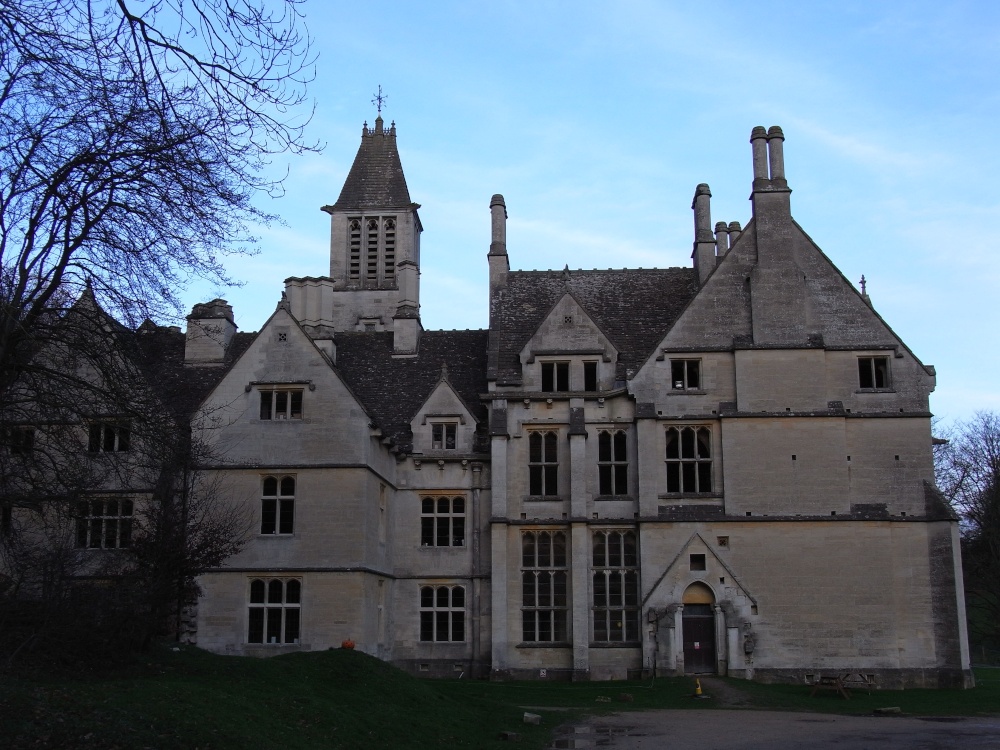 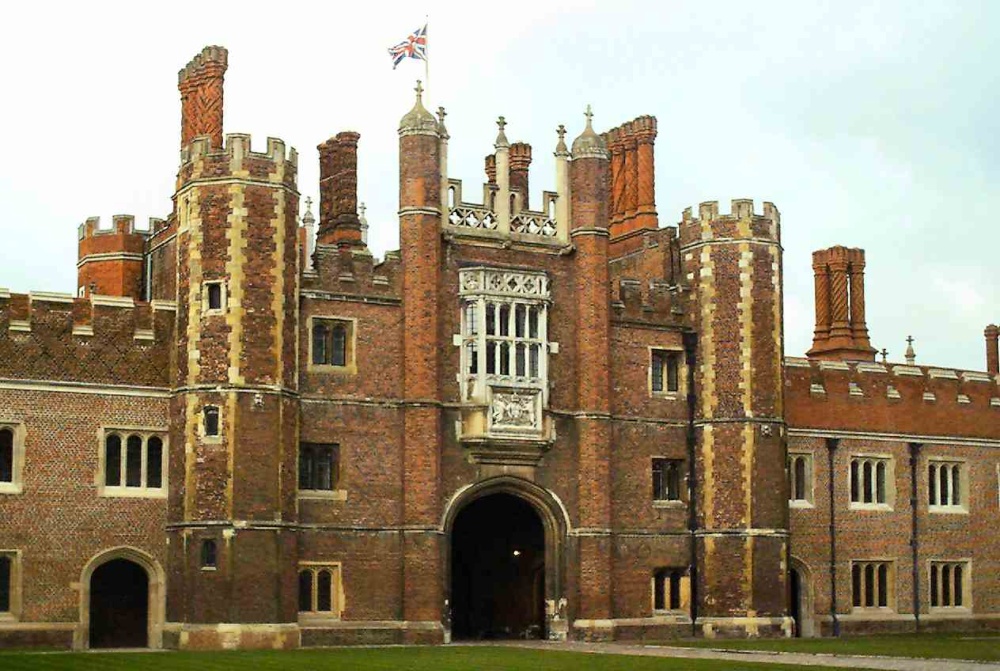 These beautiful gardens set around an illustrious castle given by Henry IV to Rowland Leinthall, who was later knighted by Henry V for his daring at Agincourt, have recently undergone a dramatic change. The castle has an interesting history, ownership has fluctuated throughout the centuries, and it is currently in the hands of an American family who are responsible for the transformation of the landscape.

Few looking around these spectacular grounds, would little realise that what they are looking at is only nine years old. Everywhere, there is colour and grace, with the eye being constantly drawn to some fresh surprise. This ranges from the lovely waterscapes interlinking the various gardens together, to lofty trees and picturesque garden buildings, all set in the shadow of a majestic 15th-century castle built amongst the tranquil watermeadows of the River Lugg.

The gardens show flair and imagination coupled with the easy atmosphere of an English country garden. Perhaps it is so much use of water flooded with wildlife that adds to this perception, but no matter, at Hampton Court garden, all is peace and perfection.

The walled flower garden is of particular interest, this has two eight-sided pavilions surrounded by canals, and lovely grassed areas planted with fragrant flowers.

Water dominated the Dutch garden, this has a narrow pool surrounded by pots of vibrant agapanthus, it is further surrounded by masses of tulips, with purple verbena flourishing in the summer. In the vegetable garden visitors can see a variety of vegetables and fruit including ornamental silver pears, slim, sylph like Irish yews have been planted here, thus giving a dimension of height to the landscape. The vegetable garden, like the rest of the gardens, is cultivated organically.

One of the most magical of all the special vista's in the gardens is that of the colourful wisteria tunnel, where one dramatic specimen is believed to have been planted some 200 years or more ago. Again water heightens the drama of the sunken garden, a waterfall splashes over ancient boulders into a circular pool surrounded by reeds, ferns and hostas. The delightfully rustic thatched "Hermitage" garden building gives access to a tunnel leading to the maze, this area is highlighted by an attractive Gothic-style tower in the middle of the maze. Once visitors have found their way through the maze, they can enjoy splendid views over the gardens from the top of the tower.

This is a garden that is full of joy, in many ways it is its stark simplicity that gives adds to its unique attraction, with much use of scented flora, including lavender covered in summer by dancing butterflies.

Hampton Court Garden has an ambience and atmosphere not usually found in the gardens of a great Castle, it is not merely a gardeners garden, but a place to be enjoyed by everyone 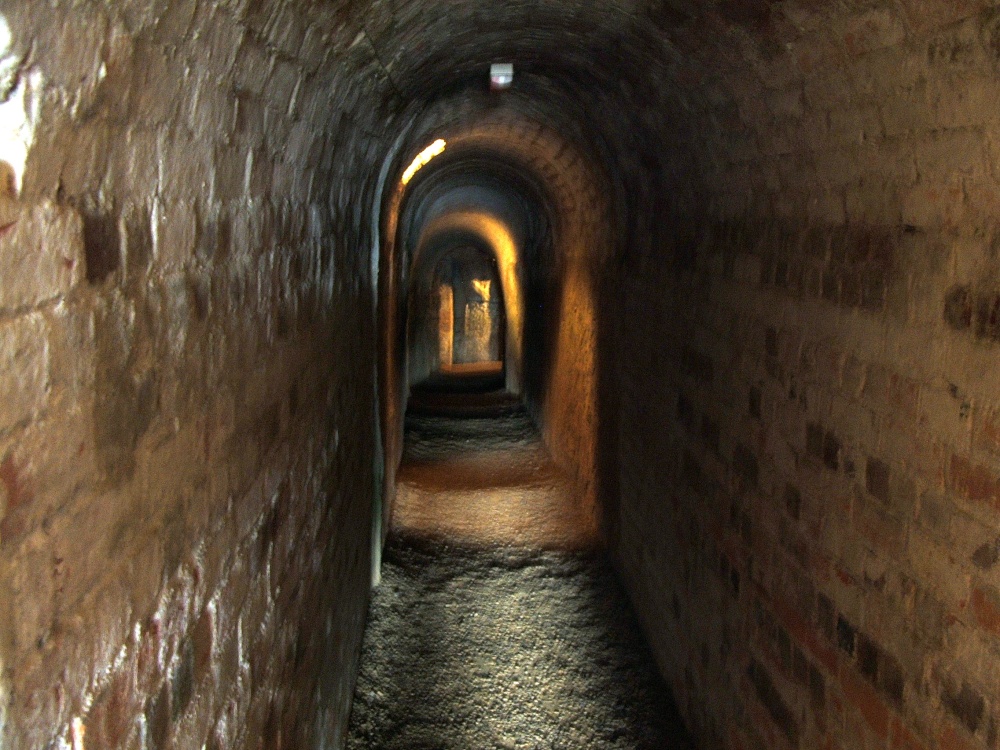 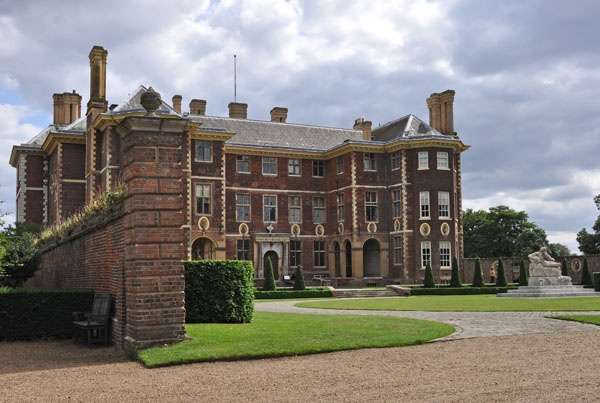