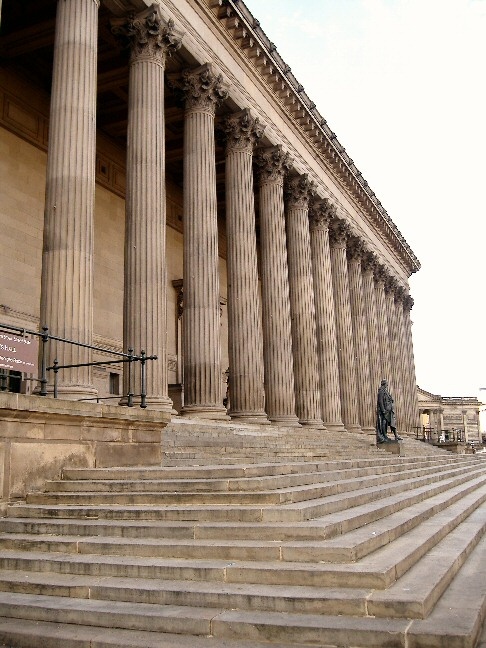 The site of the hall was formerly occupied by the first Liverpool Infirmary from 1749 to 1824. Triennial music festivals were held in the city but there was no suitable hall to accommodate them. Following a public meeting in 1836 a company was formed to raise subscriptions for a hall in Liverpool to be used for the festivals and for meetings, dinners and concerts. Shares were made available at £25 each and by January 1837 £23,350 had been raised. In 1838 the foundation stone was laid to commemorate the coronation of Queen Victoria. A competition in 1839 to design the hall was won by Harvey Lonsdale Elmes a London architect aged 25 years. There was a need for Assize Courts in the city and a competition to design these was also won by Elmes. The original plan was to have separate buildings but in 1840 Elmes suggested that both functions could be combined in one building on a scale which would surpass most of the other public buildings in the country at the time. Construction started in 1841, the building opened in 1854 (with the small concert room opening two years later). Elmes died in 1847 and the work was continued by John Weightman, Corporation Surveyor, and Robert Rawlinson, structural engineer, until in 1851 Sir Charles Cockerell was appointed architect. Cockerell was largely responsible for the decoration of the interiors. During the 2000s a major restoration of the hall took place costing £23m and it was officially reopened on 23 April 2007 by HRH Prince of Wales.

A picture of: Liverpool, Merseyside ( More pictures of Liverpool by Gives Up! ' )