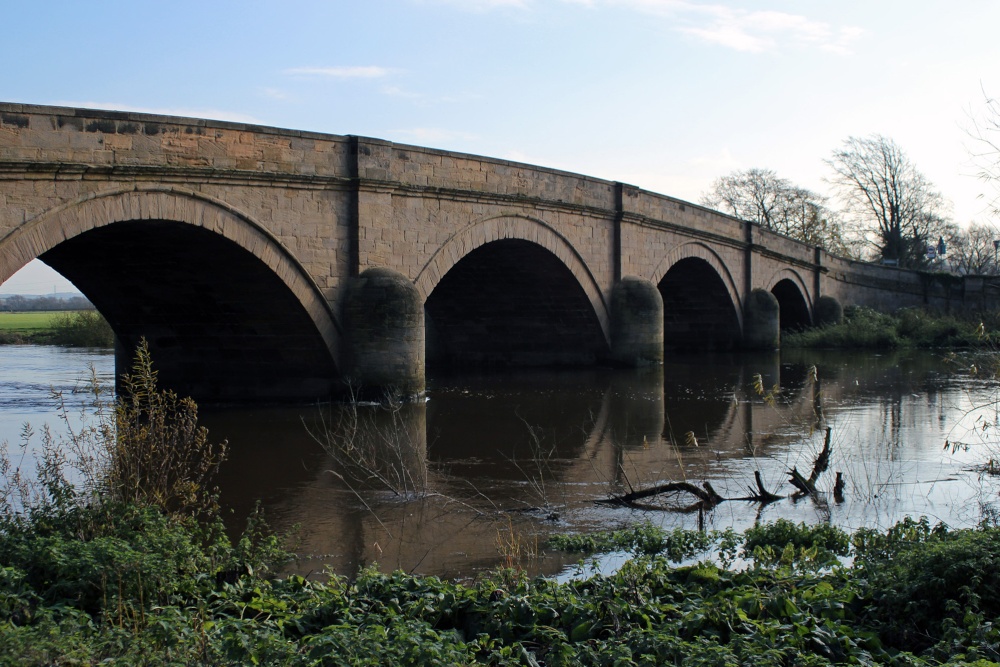 The bridge was built in the 13th century to cross the river and the surrounding marshes. The first record of the bridge was in 120, it was a wooden plank bridge. The bridge has proved itself of strategic importance throughout the ages. It was for about 300 years the Midlands' main crossing of the Trent, and the only crossing between Burton-on-Trent and Nottingham. The road over the bridge was the main road into Derby from the South until the 18th century. In January 1643, it was the location of the minor battle during the English Civil War. In the Battle of Swarkestone Bridge the bridge was defended by the Royalists against the Parliamentarians, but the outnumbered Royalists lost the day. Swarkestone bridge has had many alterations over the years, as it stands now, it is just under a mile long and has 17 arches (six of which have been unaltered since medieval times); it is built mainly of local sandstone, and is the longest stone bridge in England, and the longest inland bridge in England. The bridge is the subject of several local legends. Its construction was said to have been financed by the two Bellamont sisters. Both had become engaged and were to throw a joint celebration; their fiancés, however, had to meet with the local barons on the far side of the river. Following a storm the Trent became swollen. Eager to return to their brides-to-be and their party, the men tried to ford the river on horseback. Both were swept away and drowned. The Bellamont sisters commissioned the bridge so that no one else would suffer the tragedy they had suffered. Neither sister married and both died in poverty having exhausted their fortune on building the bridge. The bridge is supposed to be haunted by the ghosts of the two Bellamont sisters, some say it is haunted by Bonny Prince Charlie's troops. The most commonly reported phenomenon is the sound of horses approaching at speed when there is nothing about.(information gathered from local history and wikipedia) sorry the text is long, but it has such a fascinating history.