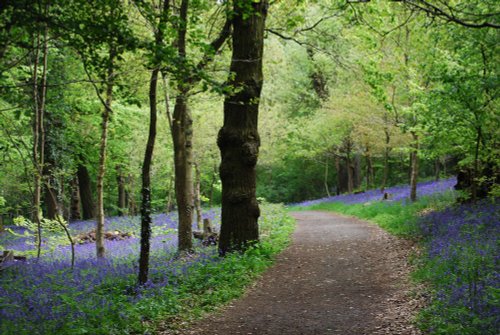 Saltwells Nature Resrve is located 2 miles South of Dudley, in the west Midlands. Grid refernece SO 935869

Directions by car :- Follow the A4036 towards Merry Hill, Dudley. Turn left at the Merry Hill traffic lights. The resrve is sign posted. Follow Coppice Lane for half a mile and then turn left at the sign for the Saltwells pubs. The car park is free, but check for closing times.

Directions by bus :- You can catchn the nx west midlands bus 276 rom Merry Hill. Takes about 3-5 minutes. Or the 276 from Dudley, about 10-15 minutes. Depart the bus at the Bunch of Bluebells pub on Saltwells road. Then walk up the alley next to Saltwells post office and turn left. This takes you into a side entrance.

The reserve is open all year round. Access is by trails, gates, stiles and steps.

Saltwells Nature Reserve gets it's name from the old brine spa, which used to exsit by Saltwells Inn. Saline water used to well up here during the early mining and was advertised fro their natural healing properties.

It is owned by Dudley council and was the first reserve in the West Midlands in 1981. It also forms one of the largest urban reserves in the county, covering over 100 hectares. In 1992 it was also the first reserve under UNESCO's man and biosphere projects.

Saltwells woods make up the main part of the reserve. Some of the tress were planted in the 18th centuary. These include mature oak, beech, sycamore, holly hazel and rowan. The trees hide birds such as greater spotted woodpecker, nuthatch, jay, treecreeper, sparrowhawks, as well as blue/great and long tailed tits. Flowers include bluebells, yellow archangel, primrose, snowdrops, wood anemone and violets. These bring in butterflies such as orange tips, ringlets, small and large whites, green veined and painted lady. Covering 40 hectares, it is one of the largest woods in the borough.

Saltwells colliery was established in the 19th centuary. There were 33 pits, served by Saltwells railway in 1851.

Doultan Clay Pit, formaly Saltwells Clay Fields before being brought by the Royal Doultan Comapny and is located in the woods. Clay was extracted for making china and sanitary items for 70 years, until the 1930's. This was taken out by canal and is now a site of special scientific interest. High cliffs reveal the section through the rocks, of the middle and lower coal measures.These were laid down in the carboniferous period, about 310 million years ago and includes river an lake deposits. It has now been claimed back by nature. When first closed it flooded and was the cause of many drownings. It now supports plants such as common spotted marsh orchid, as well as common lizards, grass snakes and smooth newts. Also until 1966, it was the omly local breeding site of red-backed shrikes. It helps to support 16 species of dragonfly and damselflies, including the emperor and southarn hawker.

It is not the only SSSI. Clay was taken out by canal at Brewins cutting, on the Dudley canal Number 2, under High bridge in Lodge Farm. It is the best place to view the conglometaic, (pebble beds), base of the carboniferous rocks, (floor of the coalbed), resting on the oldeer rocks of the silurian period, (415 million years ago).

Netherton Hill is north of the woods. The easiet way is to walk across the canal. It is gorse covered and is naturally managed by exmoor ponies. It was originally called Knowle hill from the medieval period. It was opencast for coal and clay until the 1960's and now claimed back by nature. If lucky you can spot linnets, bullfinches, reed bunting and goldcrests.

A Pictures of England article submitted by Janet Ralley