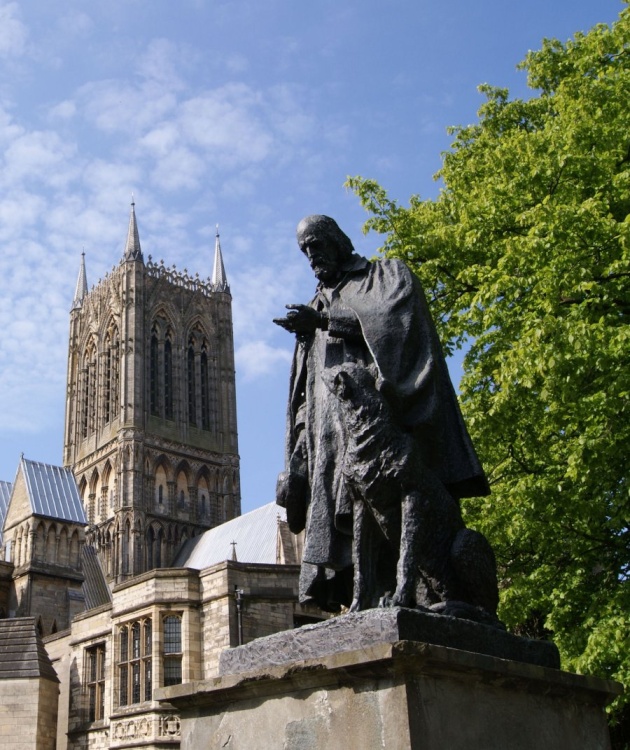 Take a picture tour of Lincoln..

Add town to favourites
This fine cathedral City was called Lindon by the Ancient Britons' and later the Romans' knew it as Lindum. In AD48 a Roman garrison was set up to command the meeting of the highways of Ermine Street and the Fosse Way. The City has a long illustrious history, it became the centre of a Bishopric in 1072 and its cathedral church was begun soon after. However much of the cathedral we see today was built following an earthquake in 1185, with very little of the earlier church remaining.

For many it is the amazing cathedral which draws the crowd, its three mighty towers rising to meet the sky are visible from all corners. These are a spectacular sight at any time but lit against a night-time sky they show an almost incomparable Gothic beauty. Inside the cathedral there are magnificent columns of Purbeck stone, and the eye is immediately drawn to what are known as "the crazy vaults of Lincoln" - a complicated system of arches above the choir. The whole of the interior is dominated by the glorious stained glass window of the east end. Within the cathedral there are numerous historic treasures, it is a church with many reminders of its ancient past, it is a constant source of fascination that is simply overwhelming.

Lincoln is well known for the magic and sheer scale of its historic buildings. Its castle was built on a Roman site by William the Conqueror in 1086, and in cobbled Castle Square handsome Georgian buildings stand side on with black and white timber framed properties from Tudor times. Looking around visitors are instantly reminded of Lincoln's 2000 year history, and yet the city has flourished, new buildings have appeared making it not simply a place from the past but a fine city focused on the requirements of the present. It is a place of culture, business and commerce, with an emphasis on leisure facilities, entertainment and the very best of retail shops.

One of the pleasures of Lincoln is to enjoy a boat trip around the city from the waters of the River Witham and the Fossdyke Roman canal, these operate from Brayford Wharfe North and give visitors the opportunity of seeing historic Lincoln from a different vantage point.

There is a fine University here, its buildings can be seen at the side of Brayford Pool. The city also has numerous pubs, many are historic, retaining features from the past. These include, the 14th-century Wig and Mitre, the Lion and Snake which is close to both the cathedral and the castle, the Victoria - a totally un-restored atmospheric building close to the castle, the Magna Carta at the top of Steep Hill, and the popular Pypewick Inn, an Alehouse of the late 18th-century at the side of the Fossdyke Canal. Visitors also find a wide range of comfortable hotels both in the city and its suburbs.

The city offers visitors a vast choice of attractions, it concentrates on the arts and features many annual events throughout the year culminating in Christmas festivities, including a Christmas market and carol service's held in all churches, with a special service in the cathedral.

Lincoln is a rewarding place to visit at any time of year, it offers so many opportunities that the visitor is genuinely spoilt for choice.

Take a picture tour of Lincoln or book Lincoln accommodation

England > Lincolnshire > Lincoln
Random England fact:
The county of Northumberland has more castles than any other county in England, with over 70 castle sites.