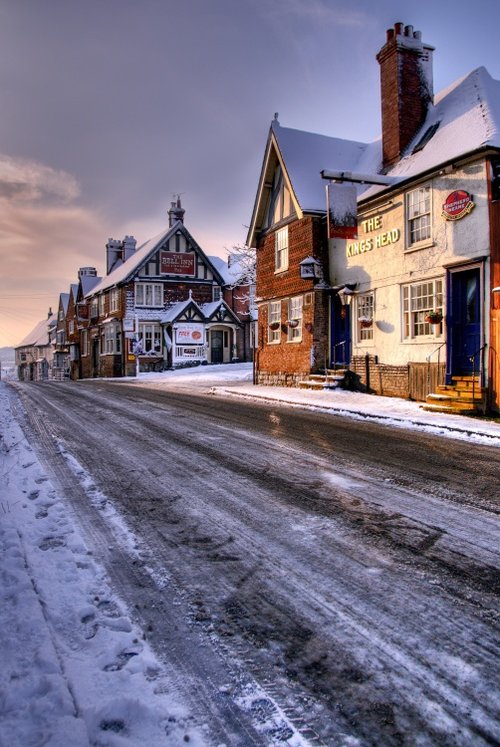 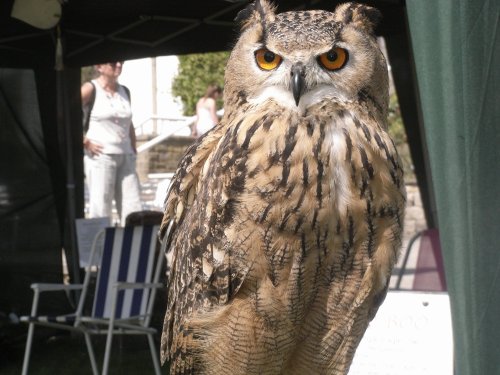 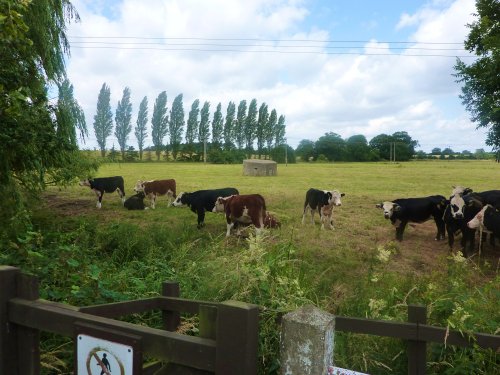 Did Richard III Kill The Princes in the Tower? 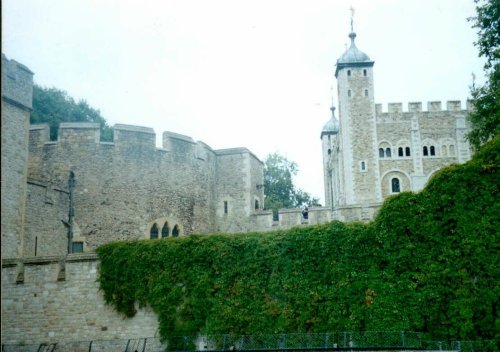 I once read a definition of history as "the process by which complex truths are transformed into simplified falsehoods". I think this is particularly true in the case of Richard III.  During the era in question we have few sources for history because few could read or write.  We have the monks who wrote from a church and obedience to God standpoint.  We have the victors of the battles who, or course, vilified the losers.  Then we have a few who were alive at the time and expressed their own opinions of what happened.  If you have an interest in a particular person or era of English history, I encourage you to look beyond what you have heard or read and dig deeper.  I always use Richard III as a classic example of what I'm trying to say. 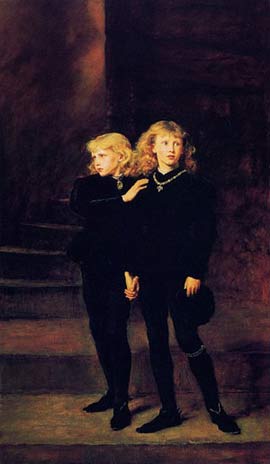 When I bring up the subject of Richard III, those who are not history buffs have no idea who he was.  Some have heard of the princes in the tower and the evil uncle Richard who killed them but don‘t really know anything about the circumstances.  Those who are familiar with him generally refer to the character as portrayed by Shakespeare.  William Shakespeare was a playwright.  He wrote to entertain people.  When you are writing for that purpose, you can take a lot of license with the people you are describing.  You can make them whatever you want them to be.  To make his play entertaining, Shakespeare made Richard into a very evil person complete with a hunchback and withered arm.  Nothing could be further from the truth.

In the early years of Edward IV's reign, when the king was surrounded by treachery and intrigue, the one man who remained constantly loyal to him was his brother Richard.  Richard was a brilliant battle commander who fought tirelessly for his brother Edward IV.  (so much for the hunchback and withered arm).  If you've ever seen one of those broadswords (the sword of Edward III is on display in St. Georges Chapel at Windsor) you know that no one is going to be lifting that thing with a withered arm.  In 1471 Richard was given command of the vanguard at the Battles of Barnet and Tewkesbury.  These battles were resounding victories for Edward. Richard had been admiral of England since 1461 and was now appointed Constable of England by Edward. Totally trusting his brother, King Edward created Richard Warden of the West Marches of Scotland. Richard took his duties seriously and held the north against any Scottish incursions.  Richard was devoted to Edward and his children.  Such was his loyalty and devotion that Edward made him Protector of the Realm.

Although none of us will ever "really" know what happened or "who" was to blame for the death of the princes, to understand what was going on at the time, we have to go back to the 1400‘s, during a time in history that has come to be known as "The War of The Roses".  All of the players in this war were descendants of the sons of Edward III and they all felt that they should be on the throne.  One branch of the family are the "Yorks", who claimed the throne through Lionel, Duke of Clarence and Edmund, Duke of York  (lots of cousins marrying cousins in those days) and the "Lancaster's" who claimed the throne through John of Gaunt, Duke of Lancaster.  Richard III, the Princes and their father, Edward IV were part of that story.

Edward IV was the eldest son of Richard, Duke of York, and Cecily Neville. Richard III was their youngest son.  During the war when Henry VI (of the Lancaster family) was deposed, Edward took the throne in the name of the house of York.  He married Elizabeth Woodville and they had many children, two of which were Edward V and Richard of Shrewsbury, who together would come to be known as "The Princes in the Tower".

Richard's problems began with the untimely death of his brother, Edward IV (probably from pneumonia) in April 1483.   As Lord Protector, it was now his job to keep little Edward V safe.  Did he put young Edward V in the Tower?  Yes he did, but it must be understood that The Tower wasn't "just" a prison.  In those days, it was also a royal residence with luxury apartments.  Young Edward was put in those apartments to keep him safe until his coronation. His mother allowed his younger brother Richard of Shrewsbury to join him to keep him company.  If Richard III were not to be trusted, I find it hard to believe that the boy's mother (Elizabeth Woodville) would have permitted him to have custody of two of her sons. 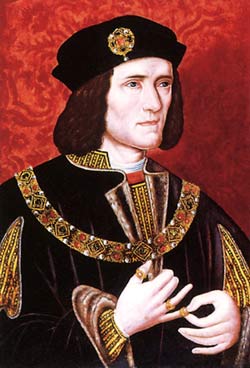 Edward IV's Queen, Elizabeth Woodville, was by all accounts a very scheming conniving person.  Upon becoming Queen, she immediately had just about every male member of her family put into some position of authority at court.  The Woodville's were not nice people and their appointments caused Edward many problems. Wealth, power and position were their main focus.  They cared nothing for the welfare of the country.

With Edward IV dead, England basically had a "boy king" Edward V, who could not rule on his own until he reached the age of majority.  Richard knew that, with the Woodville's in so many positions of power, his title of Protector would soon be removed and young Edward V would basically be a puppet king for the Woodville's.  Once crowned, Edward V would have ruled through his Council, which would have been manipulated by the Woodville faction. The clergy (which had enormous power in those days), members of Parliament and other men in positions of power knew this too.

Parliament became worried that a long minority and continuing quarrels between Richard and the Woodville relatives would lead to weak government and a renewal of civil war.  Therefore, Parliament drafted "Titulus Regius" which was an official declaration that describes why Parliament had found that the marriage between Edward IV of England and Elizabeth Woodville was found to be invalid.  Consequently their children were illegitimate, barred from the throne and why Richard III was proclaimed the rightful king.  How could this have happened?  We have to have an understanding of the laws in the 1400's.

A "betrothal" between two people was serious business and not to be taken lightly.  It was just as serious as the wedding ceremony itself.  Under both canon law and civil law a "betrothal" was a "pre-contract of marriage", a promise of marriage and was enforceable in court as if the marriage itself had taken place.  In those days, the "banns of marriage" were called (announced) in a parish church to state that a marriage was going to take place between two specific people.  The purpose of "calling the banns" and then asking during the wedding ceremony if "anyone knows of just cause why the marriage should not take place" was to prevent marriages that were invalid because of a betrothal or for any other reason.  This was the law in England at that time.

Herein lies the problem.  Prior to his marriage to Elizabeth Woodville, Edward IV was betrothed to a lady named Eleanor Butler. No banns were ever called and Edward married Elizabeth "in secret".  Marrying in "secret" usually meant "not in a church", without the calling of the banns and was considered an admission that there was a legal impediment. Parliament could have corrected the problem and allowed Edward V to remain King, but they used the excuse of a prior betrothal on the part of the boy's father for what they wanted to accomplish for practical reasons.  All things considered, Richard was Edward's brother and the best candidate for the job of king.

Richard must have signed that document with some hesitation as he was declaring his nephews to be bastards but, in his mind, the welfare of the country and the people was the most important issue.  On July 6, 1483, he was crowned Richard III of England at Westminster Abbey.  At that time, the young princes were still alive and living in the Tower.

After the coronation, Richard headed north and spent the remainder of the summer on his lands with his wife and son.  By the end of that summer, the two young princes were never to be seen alive again.  What happened to them? In Richard's absence, the boys were left in the care of Henry Stafford, Duke of Buckingham. Although his connections were all through daughters of younger sons, Buckingham was related to the royal family so many different ways that he was his own cousin.  He was the only one who had "motive" and "opportunity" to dispose of the princes.  "Opportunity" came in the form of "being with" and "caring for" the princes during Richard's absence.  "Motive" was that although his chances of inheriting the throne seemed remote, the many deaths and constant conflict between the houses of York and Lancaster had brought him within striking distance of the crown.  If the boys were dead, Richard blamed for their deaths and deposed because of it, he could possibly take the throne. His plan might have worked if not for his underestimation of Richard.  After the boys disappeared, Buckingham defected to the Lancaster side, blamed Richard for the death of the boys and started a rebellion against Richard.  The rebellion was put down, Buckingham was tried for treason and beheaded.  While Buckingham's guilt can never be proven, so many of the pieces of the puzzle fall into place if we assume that he was the one who killed the princes.

Perhaps Richard was simply a victim of circumstances and the times but he certainly was not the evil, nephew killing villain that history has made him out to be.  His were not choices that any of us would like to have to make.  He loved his brother and must have been very torn by the decisions he had to make.  He was surrounded by advisors and those who pushed him to do things that he might not have normally consented to do in the name of the welfare of England and the crown. I think it's important to ask ourselves "What would I have done?"

For two years, he was a fairly good king but his problems weren't over.  His son died, his wife died and Henry Tudor challenged him for the throne.  In the end, with the princes dead and Richards's death at the Battle of Bosworth, the 400 year reign of the Plantagenets ended.  Had he survived the battle, the Tudors and Stewarts might have remained obscure branches of the royal family.

(Note)  In 1674, while doing some renovation on the tower, a chest was discovered which contained the bones of 2 young boys.  Accepted as the remains of the two princes, the bones were placed in an urn in the Henry VII chapel in Westminster near the tomb of their sister Elizabeth of York who was wife to Henry VII.  A further examination of the remains in 1933 indicated that the boys probably died of suffocation.